Green Economy! In view of 17th April 2016 Referendum, in which Italians are called to vote about offshore drilling, we will try to shed the light on the production and consumption of RES and fossil resources.  Through an UE overview, what is happening in Italy? A prevision on the future of energy and the quality of the environment in our countries. In other words, the Italian Referendum will affect all the Europe or maybe also all over the world. 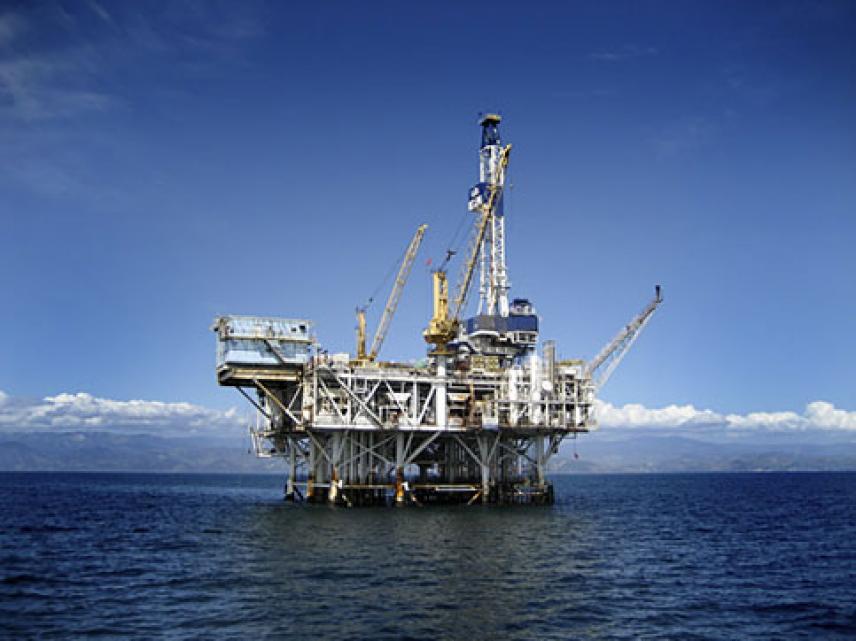 Energy is essential for economic and social development and the improvement of quality of life, mainly today that there is a social and political disagreement. This is a very important historical moment for energy: the greenhouse effect, the increase in oil prices, the liberalization of markets and the global economic crisis have led to the need of change. According to the Agenda 21 document, “…Most of the energy in the world is produced and consumed in ways that may not be sustainable if the technology will remain unchanged and if the total quantities grow without control“. The only possible solution to solve this problem is the use of non-depletable natural resources. These have fixed quantity stock and their long loop reproduction overtake man life time.  For example oil or gas and coal produce it again across million years so an irreversible stock decreases. Actually society is based on 80% of fossil energy and will use oil up to 2050. Instead, the Renewable Energy Sources (RES) such as wind, sun, water, wood and bio-fuel are able to meet at least in part world energy needs and have a limited impact on humans and the environment.

People must now intervene to try to restore the environmental balance, in order to preserve the remaining non-renewable resources and to enhance underused renewable ones. Already in 11 December 1997 by means of the Kyoto Protocol, an international treaty about global warming, many countries have an obligation to reduce emissions of pollution elements (carbon dioxide and five other greenhouse gases, namely methane, nitrous oxide, hydro fluorocarbons, per fluorocarbons and sulfur rule) to an extent of not less than 8% of emissions recorded in 1990.

It is the green economy, an economic development theoretical model known all over the world, in which benefits of specific production system (such as GNP increase) and the environmental impact on production cycle of raw matters processing (extraction, transport, Energy transformation and end product) and so its potential environmental damages by final waste treatment are taken into consideration. With this model some economic, legislative, didactic and technological  solutions aimed to reduce energy consumption of natural resources (food, water, metals, combustible and so on), wastes and environmental damages are taken into account. The final goal is to encourage sustainable development based on increase production and Energy efficiency to lower foreign dependence and to cut CO2 emissions. To do so we need RES in order to reduce most of the wastefulness.

Now the UE aims to reach 20% of energy requirements within 2020: Open Data Gate, the access platform of EU data institutions, has shown that in 2014 North European Countries made greater RES use 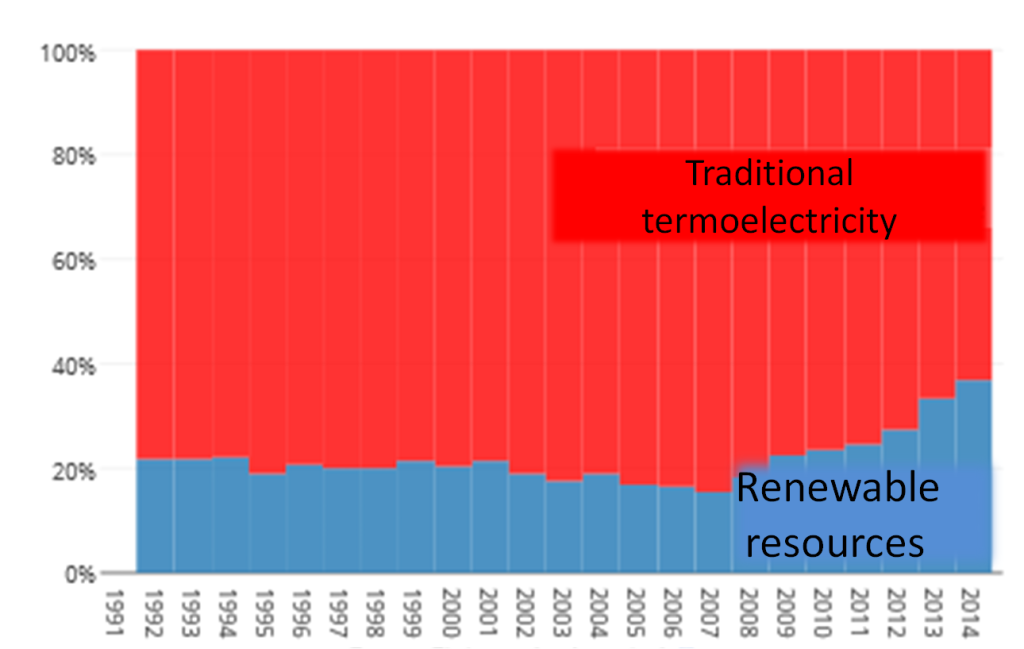 Nevertheless, this Energy intake compensate only partially Italian th energetic needs and half of energy needed is obtained by  hydrocarbon. Each Italian Region produces a variable amount of Energy depending on their own territorial extension. For example, Lombardy produced 66.032,2 GWh, an amount not enough to be independent (-38,5%). Instead, other regions such as Valle d’Aosta and Puglia produces more energy than their needs, respectively a total 1.077,3 GWh (218,2%) and 36.121,7 GWh (+129,7%). Going in order of rank, there are Trentino South Tyrol, Puglia, Molise, Calabria, Sardegna, Liguria and Sicilia . The other Italian regions are not able to produce enough energy for their need thus meaning that Italy has not energy autonomy. Therefore today the use of non-renewable energy either through offshore oil plants (natural gas) or by growth extraction (crude oil, gasoline) is still predominant 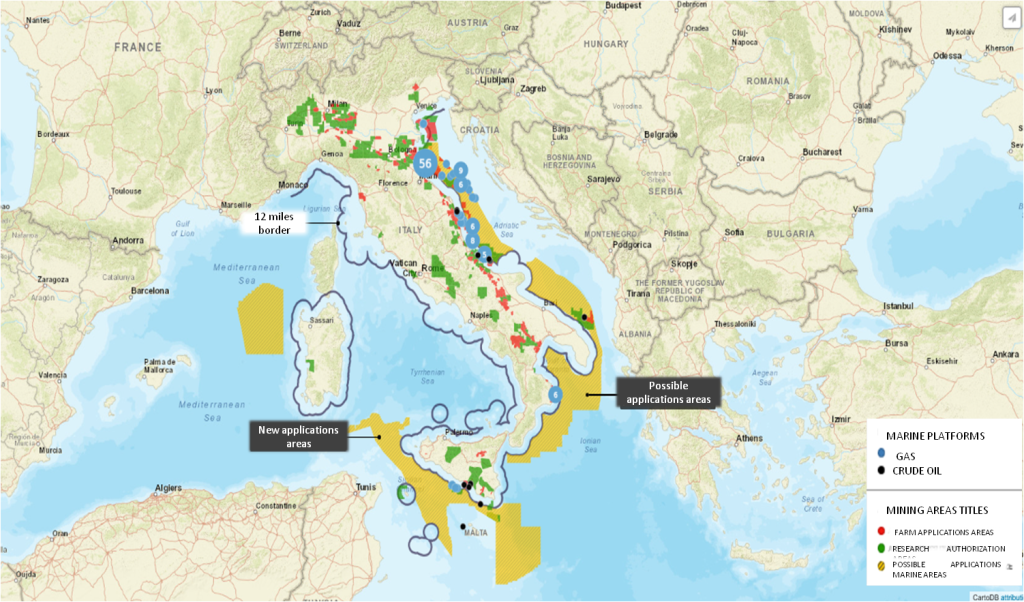 In this regard it is better to distinguish between land cultivation authorizations and offshore concessions. The formers concern regions such as Lombardia, Basilicata, Emilia Romagna, Piemonte , Lazio, Sicilia with a total of 133 operating authorizations and 90 applications (totally 16 of 20 regions); the latter  are mostly concentrated in high Adriatic, Puglia, Calabria, Sicilia where the aim is to increase the research of new oilfields even also within 12 miles limit besides north-west Sardegna and south-west Sicilia. This areas are seven and it is possible to place more than one oilfield:

Today there are 135 offshore oilfields both above sea level and undersea: 79 of them are supplying while the other 56 support the work or  are not operatives (not supplying) . According to UNMIG (National Mining Office for hydrocarbons and geo-resources) data, in February 2016 authorizations of undersea cultivations were equal to 69, instead that for in sea research were 24. So if YES will win the 17th April 2016 Referendum, these activities will be not more renewed at concession contract’s deadline, different in each specific case.

Even if social networks are bombarding us with the hastag #NoTriv, many citizens are still confused about the forthcoming Referendum of 17 April 2016 promoted by 9 Italian regions among which Marche, Molise, Puglia, Veneto Campania, Basilicata, Calabria, Sardegna and Liguria.  During this referendum all adult Italian citizens with a voter registration card have to say YES or NO to the abrogation of the paragraph 17 of the article 6, relative to the Legislative Decree n. 152 of 3 April 2006 about environmental regulations. What would it happen if NO wins? In this case the Investments in oil industry and  the jobs currently operating will be safeguarded. In contrast people voting YES are convinced that this choice would limit the pollution by avoiding the transit of oil tankers near Italian coast and would be a stimulus to invest on renewable energies, safeguarding the sea and avoiding all the problems related to the sea drilling such as hydro geological instability, alteration of the sea ecosystem and consequent loss of biodiversity.  According to the YES, the use of fossil fuel would not reduce the Italian energetic dependency on other countries: oil obtained from Italy would  still belong to oil companies and in any case the quantity of oil extracted would cover only a limited period of time ranging from 2 to 6 months.

So what do we expect? Recent polls from social network foresee that the 65% of people are inclined to vote YES, the 14% NO while the 21% are still confused. Instead, about the possibility to reach the quorum of 50% of polling, the 75% of Italians thinks to attend the vote, the 19% NO while the 9% still does not know. Let see what happens. Will comment post Referendum.